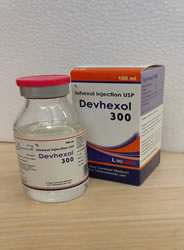 Devhexol 300  is an effective non-ionic, water-soluble contrast agent which is used in myelography, arthrography, nephroangiography, arteriography, and other radiographic procedures. Its low systemic toxicity is the combined result of low chemotoxicity and low osmolality.

This medication is used before X-ray imaging tests (such as CT scans). Iohexol contains iodine and belongs to a class of drugs known as contrast media or dyes. It works by adding contrast to body parts and fluids in these imaging tests. Iohexol improves the images obtained during a CT scan

This medication may also be given by a health care professional by injection into a vein, joint, the spine, or placed in the bladder or the rectum it can also be taken orally.

The dosage is based on the specific imaging test, age, and weight.

Organic iodine compounds block x-rays as they pass through the body, thereby allowing body structures containing iodine to be delineated in contrast to those structures that do not contain iodine. The degree of opacity produced by these compounds is directly proportional to the total amount (concentration and volume) of the iodinated contrast agent in the path of the x-rays. After intrathecal administration into the subarachnoid space, diffusion of devhexol in the CSF allows the visualization of the subarachnoid spaces of the head and spinal canal. After intravascular administration, devhexol makes opaque those vessels in its path of flow, allowing visualization of the internal structures until significant hemodilution occurs.

Iohexol is absorbed from cerebrospinal fluid (CSF) into the bloodstream and is eliminated by renal excretion. No significant metabolism, deiodination, or biotransformation occurs.

Diarrhea, nausea, vomiting, stomach pain, gas, or headache may occur.  A very serious allergic reaction to this drug is rare.

Drugs which lower seizure threshold, especially phenothiazine derivatives including those used for their antihistaminic or antinauseant properties, are not recommended for use with iohexol. Others include monoamine oxidase (MAO) inhibitors, tricyclic antidepressants, CNS stimulants, psychoactive drugs described as analeptics, major tranquilizers, or antipsychotic drugs. Such medications should be discontinued at least 48 hours before myelography, should  not be used for the control of nausea or vomiting during or after myelography, and should not be resumed for at least 24 hours postprocedure. In nonelective procedures in patients on these drugs, consider prophylactic use of anticonvulsants.

Devhexol should not be administered to patients with a known hypersensitivity to iohexol.

It is available in various concentrations, 300mg and 350mg.z